I'm always interested to see the different customizing cultures that arise in fandoms. I read up on all kinds of tutorials for all kinds of things and often find ways to apply the techniques for something only vaguely related to art or dolls. I go off and spend some time painting gaming miniatures, and come back with a new skillset for making and painting dolly armor.

I dabble in action figures too.  I'm a sucker for articulation in dolls, so this shouldn't be much of a surprise!  Customizing action figures is giving me a workout in sculpting, articulation, and how to get friction joints and paint to get along.

But it's not all one way learning.  I think there's a lot that action figure customizers could learn from doll customizers, and that's this weekend's project!

I've found that the miniature and painting communities are all about texture and detail, washes and drybrushing. These things are great for getting realistic textures in molded chainmail, or quickly getting shading on a figure so tiny it would be silly to spend hours manually building up shades with a size 000 brush. But as doll customizers have discovered, there's an easier (and faster!) way.

To any action figure peeps reading this: you don't need to go customize dolls.  You don't even need to touch a doll!

This is Kitty Pryde. She's my favorite character in the Juggernaut BAF Marvel Legends wave, but feels like the gal that got the corners cut on so that Rogue could get rouge. She's pretty accurate, just drab so I wanted to work her over and make her pop. I didn't remove any of her factory makeup or body paint, I just added.

Kitty has a square, dull face. It's a very nice face sculpt, but her cheeks are broad and blank and her lips are underpainted, making them look a lot smaller than they are. I broke up her cheeks by adding shadows to the hollows and jawline, highlights across the cheeks, down the nose, and on the chin. Her mouth and eyes are emphasized by added shading around the eyes and over the existing lip paint. 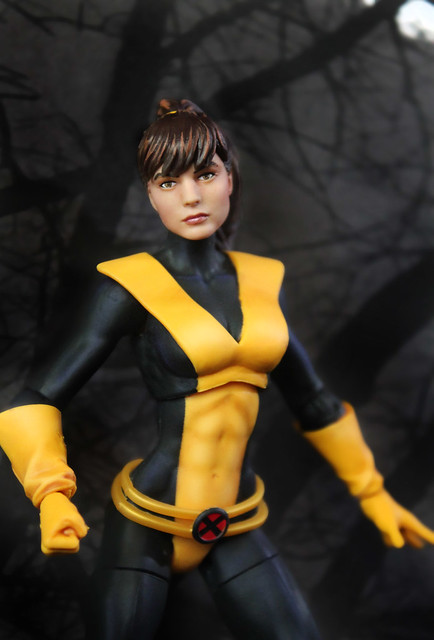 I didn't just work over her face either, I did her whole body as it was similarly bland. Her hair looks kind of jarringly cartoonish next to the subtly shaded and contoured face and body. All those highlights and shadows in the yellow aren't from lighting, they're painted and pastel'd in there. I also contoured the black parts with blue highlights, but you can't really see that in the pics.

Jean Grey had much more serious factory wonk. And evil, evil eyebrows. She has a pretty decent face, sculpt wise, but the makeup is AWFUL. I'm also not a big fan of the hair, I feel like it's too far forward and she has a shrunken forehead. So far I've only done her face because I'm not sure what I'll do with the rest of her. 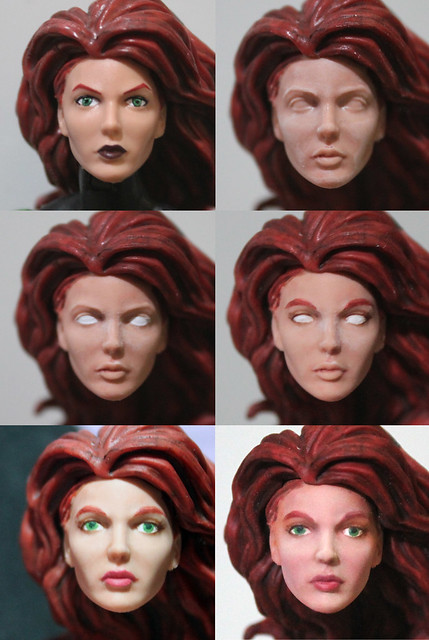 Jean has a long, angular face. I gave her thicker, rounder eyebrows to make her face look more friendly, repainted her eyes and lined them thinly with browns instead of black to suit her fair complexion. I gave her a more natural lip color and overpainted the edges of her mouth slightly to give her fuller, less pursed lips. When I shaded her out, I tried to break up that long angle down the cheeks on each side by highlighting the bridge of her nose and across her cheeks and bisecting the under cheeks on the front and sides with blush.

If that last bit makes as much sense as latin to you, don't worry--it won't after you watch a few face contouring videos.

The end result is her face has a softer, more oval look that better suits her friendly personality. 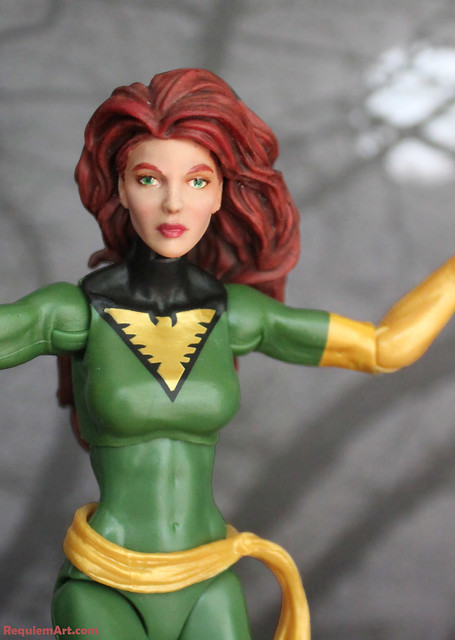 If you want more than a youtube video will teach you, try makeup books (Kevin Aucoin's books do a great job of breaking down the geometry).  It is possible to make one shape look like another shape just by where you put the highlights and shadows!

As a side note, the angular structure of this face will make it very easy to make terrifying dark phoenix. To do that, I'd do the opposite of what I did, by emphasizing the angular nature of the face by adding shadow under her cheekbones and using more harsh eyebrow and lip shapes. I'd also probably use a palette that had more grey and purple tones than earthy brown and pink tones.

I hope you found this informative!  You'd be amazed the things you can learn that are relevant to your skill set by looking at things that don't seem to be related at all :)