New doll review!  It's been a while.  These ladies were revealed at SDCC 2017, and I've been waiting not so patiently to get my hands on one.  They have a September release and will be exclusive to Toys R Us for the first few months.  My local TRU put their stock out about a week early, score!

I'll admit immediately I have no idea who she is.  I used to be a WWE fan, but it's been a long time since I had cable and the guys and gals of pro wrestling don't last very long--understandably, considering how physically demanding it is!

I picked this doll for purely superficial reasons.   I love the steampunk outfit, good shoes, good hair, good facesculpt.  She was my favorite from the promotional photos, and after seeing all the dolls in person my opinion wasn't changed.

(Full review/doll nudity behind the cut) 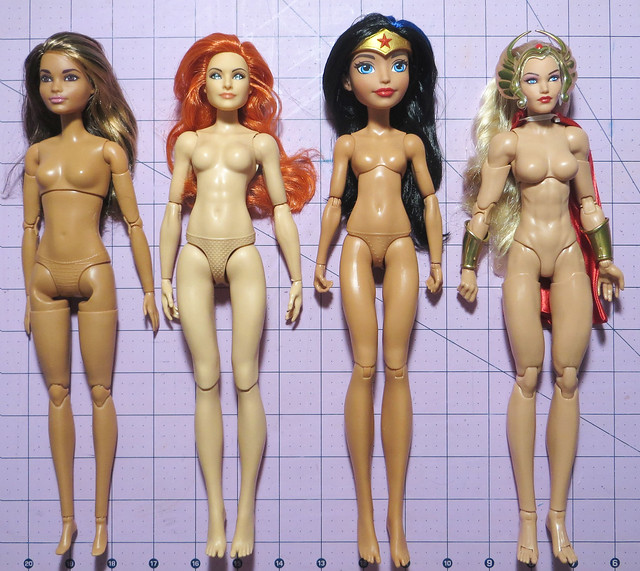 The big question everyone had was "What body is she on?"  I had no idea!  In some pictures it LOOKED like DC super Hero Girls, in others, a less articulated version of the Made To Move body that is being used on the Wonder Woman Barbie dolls. I hoped that it was possibly a less articulated version of the spectacular She-Ra body (LOOK AT THOSE ABS!), but that was more of a wish.

Turned out, she has a totally new body!  I didn't expect that!

In design, it's pretty similar to the DC Super Hero girls.  It looks like they purposefully tried to give them more realistic proportions, with a longer/wider torso, longer arms, smaller head, and much larger boobs. 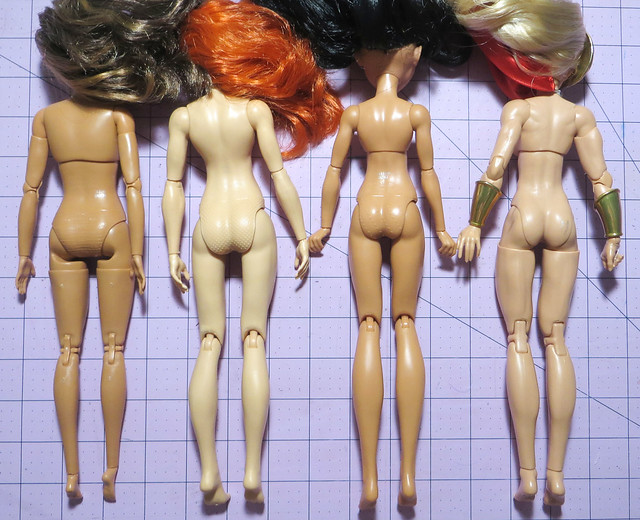 Articulation wise, also very similar to DC Super Hero Girls.  No bust joint, but she can stand on her own and has almost identical range of motion on the joints that they share.

Feet are about the same size, but more arched.  I tried to shoe swap, but they either don't fit or if you force them they put the doll at a weird angle and she can't stand on her own anymore.

A quick clothes swap showed me that they can sort of share clothes with DC Super Hero girls, but things get weird.  Like if you put DCSHG leggins on her, they will fit but won't go high enough to cover the molded on underwear.  If you put WWE leggings on DCSHG dolls, the waist pulls up naturally, but the crotch is about 1 cm below the doll's crotch.  I'll run the numbers later, but I'm pretty sure this girl is going to need her own clothes.

I love this doll! I really hope it becomes a popular line.  Unlike the new Fashionista bodies, the articulation is on point and you can feel that this doll is made of much more quality, durable material than Barbies.  I loved the DC Super Hero Girls evolution of an athletic body, and this is that +1.  I'm kind of annoyed by the vastly increased thigh gap, but I'm also pleased by the bigger boobs since the general trend with newer dolls has been smaller and smaller ones.