Yeolume came out a while ago. And then she disappeared. Literally. The company website doesn't even show her existing anymore. There were 2 dolls made (this is the first) and... well yeah. She didn't exactly win the hearts and minds of the public. But she's still a member of the pullip family. This is my review, which is more of an analysis than anything else.

TONS of pictures ahead 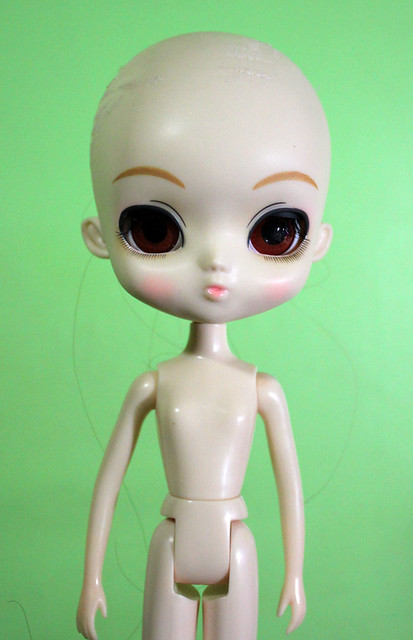 Here she is stripped of all her distracting clothes and hair, so we can see the doll itself. She has a blythe-like body, with bendy arms/legs instead of joints like the other dolls. She's supposed to be Pullip's daughter from the future...but is essentially the Pullip response to Midi Blythe.

The second thing that struck me was her faceup. Most first release dolls don't take full advantage of the new sculpt, but the quality of this head is really not good. The blush, lips, and eyeshadow are all small dots of concentrated spray, and the heavy black around the eyes is thick and clumsy. The eyelashes are thinner, but there is a strange quality to them, some of the lashes seem to break and then are continued slightly sideways so that the lashes are not a solid line. 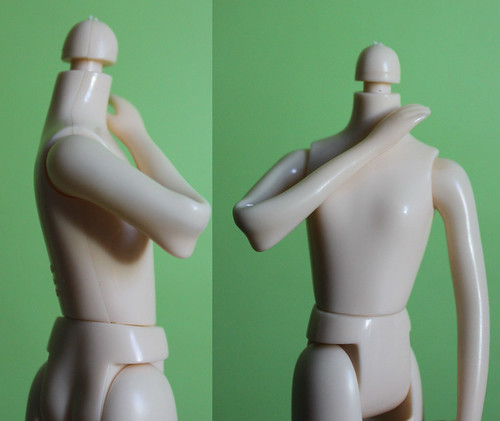 And the body... yikes. Years ago, Volks made an elegant body that was a bendy body. It was very nice looking, and high quality, but the problem was that after bending the joints a bit, they would break. Same thing happens with a paper clip, if you bend it back and forth at the same place a few times. Pretty sure that will also happen with this body. In the meantime, it bends, but I can also see the shadow of the wire through the arm and joints would have been much better. This doll retailed for less than a pullip (8800 yen) it was still more than Pullip was originally released at. 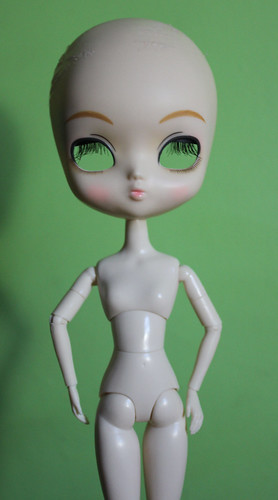 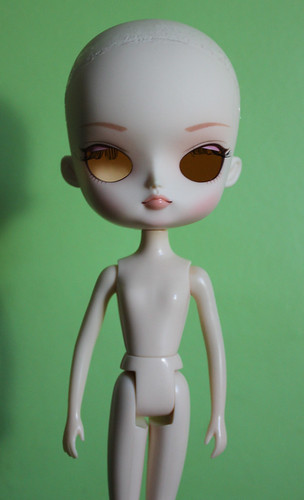 Oddly, although they are about the same size (Yeolume has a bigger head and smaller body than Dal) their heads do not suit each others' bodies very well. I think it's because Yeolume's head is tilted upward, so she shows both the underside of her chin and her neck so a long neck makes her look weird, and Dal's head goes straight back at the chin, so a short neck makes her look weird. 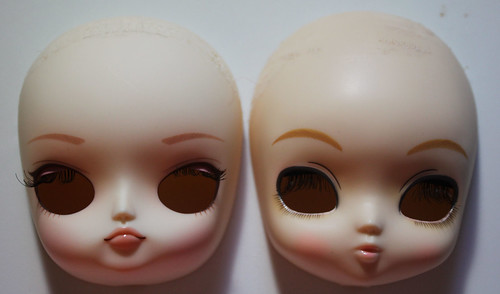 In fact, all of my comparisons are going to be with Dal, because Yeolume looks much more like her than Pullip. Except... cheap. I have a hard time explaining it, but there is a quality to Yeolume's face that looks like a copy of a copy. The way the light shines on the two heads, you can see that Dal's face has highlights, lowlights, and much sharper shadows. Yeolume's face does not. It reminds me of the cheap chinese fakie recasts I found a while ago, just less orange. 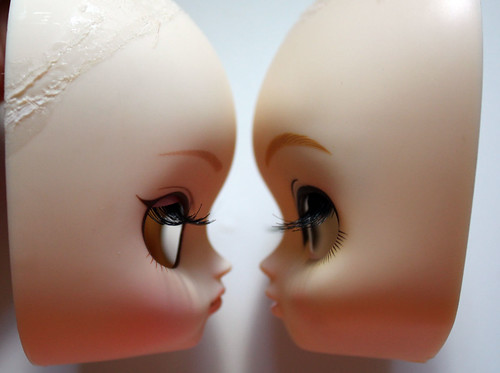 Yeolume looks to me like what might happen if someone took a Dal head and tried to make it look more like a pullip, (which I tried myself when Dal first came out). The nose has been blunted, the eyes made smaller, the lips opened, and the underside of the cheeks sanded to make her head more heart shaped. And those are all the exact same things I did to my Dal years ago. The only thing I didn't do is the weird thing where the dome of the head was built up taller. 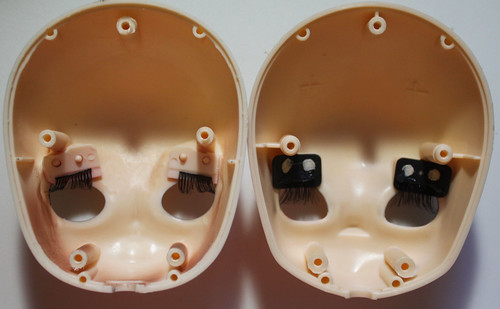 I did a closeup of the inside of the eyelid. On dal, the eyelids are painted and glued in. On Yeolume, the eyelids are cast of a different color plastic, then melted in (I assume with a heat gun) and then the eyelashes are secured with a line of hot glue. 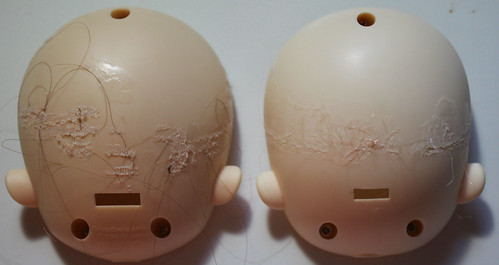 The backplates are even more identical. 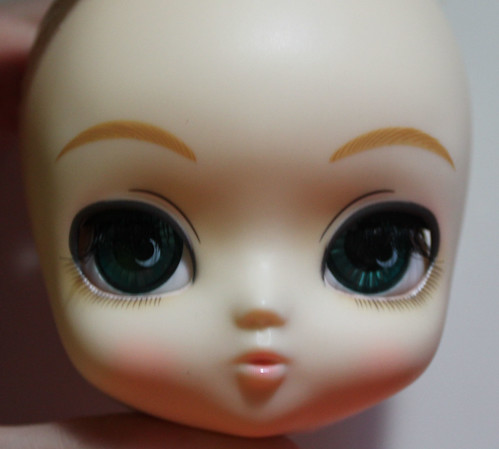 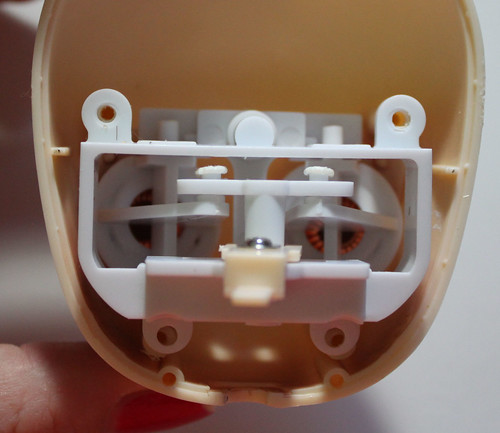 Unsurprisingly, Dal's eyemech fits inside of a Yeolume. The screw holes don't line up exactly, but I suspect if the bottom holes were cut off, the mechs would be swap-able. HOWEVER, like previous eyemech swaps, by borrowing a previous doll's eyemech instead of making a completely new one to fit the new eyes, Yeolume look at things, but her eyes don't focus. 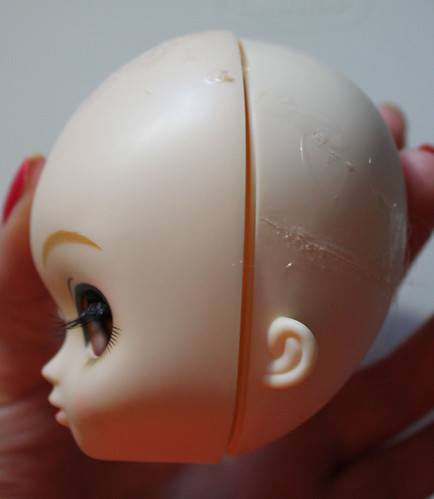 Yeolume's face is much shallower than a Dal's. I suspect this is why her head was domed up. That way, the same wigs can be used instead of having to go for a smaller wig size.

So... yeah. I'm not especially impressed by Yeolume. She does customize well, but a talented customizer can make anything look good. I'll be customizing this one, and when I do I'll post my review on how I liked her as a palette.